New Mill Male Voice Choir is based in the village of New Mill near Huddersfield, West Yorkshire, not far from the ‘Last of the Summer Wine’ town of Holmfirth.

The choir was founded in 1991 when twelve men gathered in a local public house to sing. Len Williams, a former singer with the Welsh National Opera, became Musical Director and provided the inspiration and encouragement to form these men into a Choir. Two years later and with three times more members the Choir sang as part of the World Choir at Cardiff Arms Park under the baton of Owain Arwel Hughes with Shirley Bassey as the main attraction. 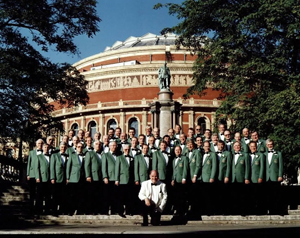 In 1997 the choir produced their first CD and also took part in the One Thousand Yorkshire Voices at the Albert Hall raising money for cancer relief. This was repeated in 2000 at the Sheffield Arena and again in 2004 at the Albert Hall.

Although a relatively young choir we have enjoyed touring abroad and have been to Italy, Czech Republic, Spain and Poland. In 2014 the Choir sang at the Menin Gate in Ypres, Belgium.

Elizabeth Hambleton was appointed MD in 2002 and Anne Levitt as Accompanist. This proved to be a highly successful combination with the choir developing enormously under their all-female hierarchy!

One of the choir’s favourite venues is Huddersfield Town Hall. It was at this venue in 2005 that the Choir were instrumental in organising the Tsunami Relief concert, ‘Huddersfield in Harmony’, when male voice and ladies choirs from the Holme valley raised more than £20,000.

In 2006 we hosted a concert with Sir Willard White, one of the world’s great operatic bass singers, as our star guest.

The success of the Willard White concert gave the Choir confidence to promote annual ‘Big Name’ events in Huddersfield Town Hall. Recent years have seen concerts with Aled Jones, The Morriston Orpheus Choir, Julian Lloyd Webber and Alison Balsom. All have been hugely enjoyable and have proven to be memorable evenings.
The Choir have enjoyed competition success at the Don Valley Festival where they won in 2009 and 2010 and came second in 2011.

Elizabeth retired as MD at the end of 2010 and Alan Brierley became our third MD in 20 years when he took up the role in March 2011. Alan’s calmness and confidence under pressure was immediately put to the test when he had to lead the Choir in a concert in the formidable surroundings of York Minster, his first concert as Musical Director! Since then the Choir have performed in Southwark Cathedral and at the Menin Gate in Ypres as well as continuing our reputation for staging ‘concerts with a difference’ at Huddersfield Town Hall. Who will ever forget the Russian version of ‘When I’m Cleaning Windows’ with The Ukulele Orchestra of Great Britain!

We left our old web behind in April 2017. It contained a great many memories of concerts and social events that we didn’t want to lose.

They are held here in pdf format, one for each year.

2009 – Elsecar I and Morriston Orpheus