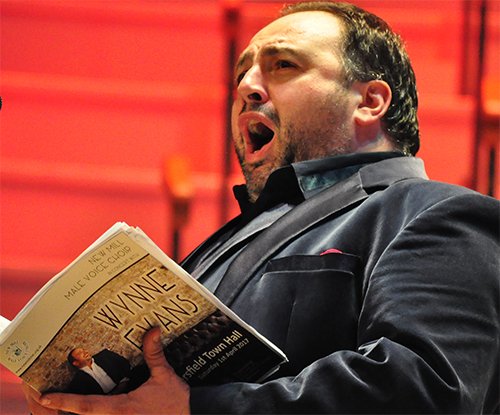 The Choir returned to the Town Hall after a break of 18 months with a repertoire that had (almost!) completely changed. A dip into the world of musical theatre for ‘The Deadwood Stage‘ and Opera for ‘The Pilgrims’ Chorus‘ gave the Choir the opportunity to demonstrate the versatility they have maintained over the 25 years since the Choir was formed. A stage like the Town Hall also demands performances of traditional Male Voice items and ‘Llanfair‘ and ‘Morte Christe‘ fulfilled this requirement admirably.

But what of our Guest?

He has been called the spoof Opera Star of the Gocompare TV ad but Wynne certainly proved he is an all-round entertainer.  He had the Town Hall audience in tears of laughter with jokes and anecdotes about his Opera career such as when he turned up at The Royal Opera House in Covent Garden and, having informed the receptionist he was a new Principal, was asked whether that was for the Opera or the Ballet!

The singing was special too. He filled the Town Hall with his powerful voice and gave a succession of fine performances with songs like ‘Granada‘, ‘Shenandoah‘, and ‘Impossibls Dream‘.